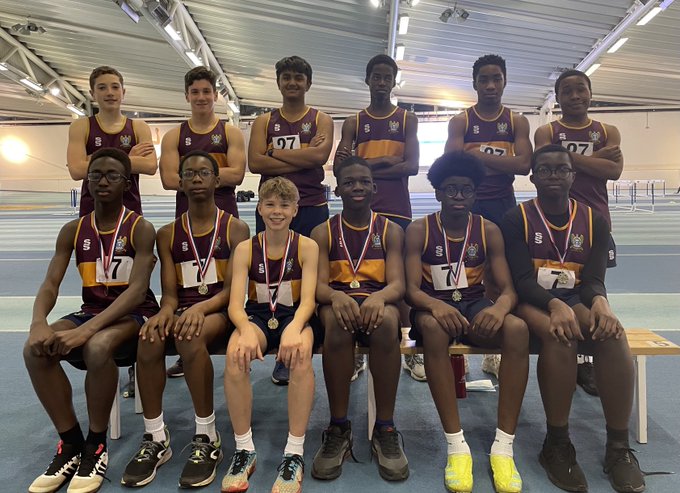 After a challenging first round and a competitive semi final, a team of our young athletes progressed into the Lee Valley Indoor Cup finals, held in early December 2021. The early rounds had marked some areas of strength and some areas that we needed to focus on as we work towards the summer term, but the boys showed themselves to be resilient and most notable was the strength of the Year 8 athletes which saw them competing against Year 9s from other schools.

The boys put up some impressive performances in this final event. Hans Nmaju in Yr 8 set a new 60m hurdles record (9.51s), winning his heat. Arinze Nwafor also won his hurdles heat but was just outside his personal best. The 60m was also an area of strength: Daniel Asiedu (Yr 8) won the 60m sprint and lowered his own school record to 7.64s while Tolani, also Yr 8, finished 2nd in his heat, setting a personal best time of 7.81s.

The boys posted a number of personal best times throughout the competition, and there was one more school record as Titomi Olukemi also in Yr 8 lowered his 300m best and won in a time of 40.71s.

The final points placed our A team 1st among the top 6 teams with an impressive tally - we won 5 of the 9 events and placed 2nd elsewhere.

The B team finished 4th in the B final which was the next 6 teams and we note with some pride that this was despite them competing against other schools' A teams.

A massive congratulations to these boys who show a range of exciting talent that we hope to see more of in the summer!