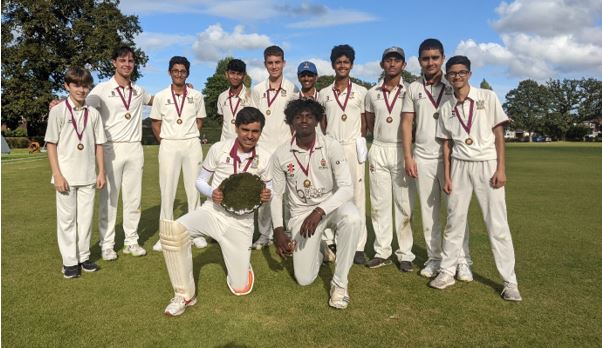 On Thursday the 9th September, the Year 11 cricketers played Kent College in the Miskin plate competition. It was a very exciting game that began with DGS losing the toss and being put into bat. Every member of the team played well but there were stand-out batting performances from Aryaman Singh and the captain Visnu Parakirama, who both made over 50. Manav Khatri also batted extremely well and was unlucky to be run out.

There were also many excellent bowling performances with Rishab Singhal closing the bowling well in a very tense final over, and James Elliott taking a key wicket in the 19th over. Alex Starkey also deserves a mention for some excellent fielding and taking two catches.

All members of the team played extremely well and contributed to a very close victory. In the end, DGS triumphed by 7 runs in what was a very tense and exciting game. Congratulations to the boys for a great afternoon's cricket!